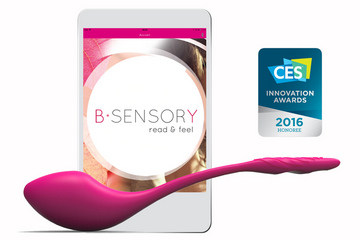 The seemingly endless show floor at last week’s CES in Las Vegas was home to a plethora of useful gadgets. There were countless health-monitoring devices, camera-toting drones and state-of-the-art automobiles. But for every device with an immediately obvious purpose, there was at least one gadget there that would likely make you stop and wonder what the heck you were looking at. From fuzzy robotic tails for humans to “literary” sex toys, here are some of the most obscure (and, arguably, the most fun) tech products from this year’s consumer electronics show.

A startup with a predilection for furry tails had a presence at CES this year. The company, in-tail, creates “the world’s most intelligent, realistic, fun and furry animatronic, wearable tails for humans.”

The tail is a long, vertebrae-resembling creation that buckles around the wearer’s hips. You can purchase a variety of furry covers to go over the tail (both leopard print and plush “yeti” white are available). To move the analog version of this contraption (which retails for $199), you simply shake your rear end around. But the company is also coming out with a digital version of the tail that you can control with your smartphone.

Why would anyone want one of these strange devices? Well, in-tail claims its products can be used for dancing, exercising and improving balance control. (One can imagine, however, that this eccentric product might have a variety of other uses that aren’t explicitly stated.)

If Goldilocks designed a travel mug, this would be it. The Ember mug is a high-tech cup that ensures your coffee or tea isn’t too hot or too cold, but just right.

It may look like an ordinary travel mug, but Ember is embedded with a “phase change cooling system” that ensures your beverage isn’t too hot to sip. An “active heating” system inside the mug keeps your drink from going tepid. You can set the temperature of the mug through an app on your smartphone or by turning a dial on the bottom of the cup.

This “smart” gadget might not sound that strange, but consider this: The glorified coffee mug is expected to retail for $149. The company is just now shipping out the first batches of the product after a successful Indiegogo campaign. That’s a lot of cold, hard cash to throw down on a heated mug.

The $149 you could spend on a connected coffee cup pales in comparison to the $1,300 you could shell out for the Ripple Maker — a machine whose sole purpose is to draw a pretty picture on top of your cappuccino froth.

Designed for use in coffee shops and restaurants, the machine “prints” any image you want on top of your drink using a tiny amount of coffee-based extract. The Ripple Maker comes preloaded with an extensive library of images, but users can also upload their own pictures, drawings or quotes to the machine via a mobile app. Birthday messages, love notes, selfies and company logos are just some of the things you could soon see floating on top of your coffee mug, thanks to this new technology.

Sex just got a lot smarter, thanks to a connected love toy called the Little Bird, which retails for $99. This odd-looking device (it resembles a pipe) connects to your mobile device and can be controlled through an app with some simple gestures, like a soft blow on the screen or a gentle tap of the finger.

Previous article
How Makar Sankranti celebrated in different region and what are they called?
Next article
Mumbai Creates ‘No-Selfie Zones’ After Drowning Death