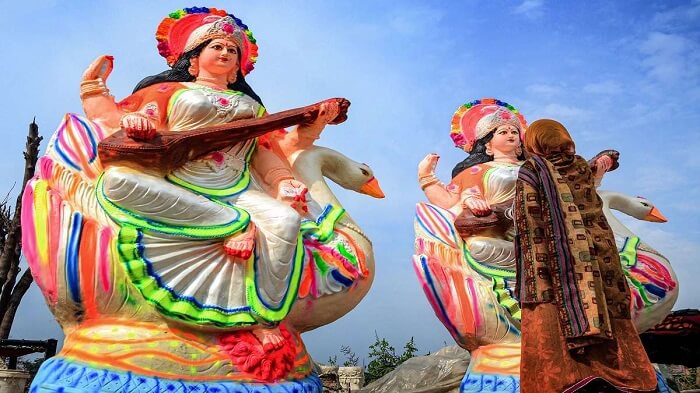 When is Vasant Panchami celebrated?

Vasant Panchami is celebrated every year on the fifth day of the bright half of the Hindu lunisolar calendar month of Magha, which typically falls in late January or February. Spring is known as the “King of all Seasons”, so the festival commences forty days in advance. It is generally winter-like in northern India, and more spring-like in central and western parts of India on Vasant Panchami, which gives credence to the fact that Spring is actually in full bloom 40 days after the Vasant Panchami day.

How is Vasant Panchami celebrated?

Many families mark this day by sitting with babies and young children, encouraging their children to write their first words with their fingers, and some study or create music together. The day before Vasant Panchami, Saraswati’s temples are filled with food so that she can join the celebrants in the traditional feasting the following morning. In temples and educational institutions, statues of Saraswati are dressed in yellow and worshiped. Many educational institutions arrange special prayers or pujas in the morning to seek the blessing of the goddess. Poetic and musical gatherings are held in some communities in reverence for Saraswati.

In the Punjab region, Basant is celebrated as a seasonal festival by all faiths and is known as the Basant Festival of Kites. Children buy Dor (Thread) and Guddi or “Patang” (Kites) for the sport. The people of Punjab wear yellow clothes and eat yellow rice to emulate the yellow mustard (sarson) flower fields, or play by flying kites. The tradition of flying kites on various festivals is also found in northern and western Indian states: Hindus in Rajasthan and especially in Gujarat associate kite flying with the period prior to Uttarayan; in Mathura (Uttar Pradesh), kites are flown on Dussehra; in Bengal, kite flying takes place on Viskwakarma Puja in September. The sport is also found in Maharashtra, Madhya Pradesh, and parts of south India.

In Nepal, Bihar, and eastern states of India such as West Bengal including north-eastern states like Tripura and Assam, people visit Saraswati temples and worship the goddess Saraswati  (Saraswati Puja). Most of the schools arrange special Saraswati puja for their students on their premises. In Bangladesh, all major educational institutes and universities observe it with a holiday and a special puja.

History of Basant Panchami in Punjab-

Namdhari Sikhs have historically celebrated Basant Panchami to mark the beginning of spring.

How it is celebrated in Bangladesh and Bengal-

The first day of Spring (Boshonto) of Bengali month Falgun, of the Bengali calendar, celebrated in Bangladesh and West Bengal with processions, fairs, and family time. In Bengali, Pahela stands for ‘first’ and ‘Falgun’ is the eleventh month of the Bengali calendar. This day is marked with colorful celebration and traditionally, women wear yellow saris to celebrate this day. This celebration is also as Boshonto Utshob.

Vasant Panchami is not only celebrated in India but also in Lahore, Pakistan Kite flying in Lahore goes back centuries. After the creation of Pakistan, it evolved into a highly competitive sport that is not limited to “Basant” only. There are regional teams, competitions, and trophies. Kite And string making is an industry all over central Punjab providing livelihood to thousands.

Basant Panchmi, the prominent festival of Hindus, was adopted by Indian Muslim Sufis in the 12th century to mark the grave of the Muslim Sufi saint dargah of Nizamuddin Aulia in Delhi and ever since, has been observed by the Chishti order.

Previous article
10 Beautiful villages in India that you must visit at least once in a lifetime
Next article
Kodinhi – The village of twins in India.