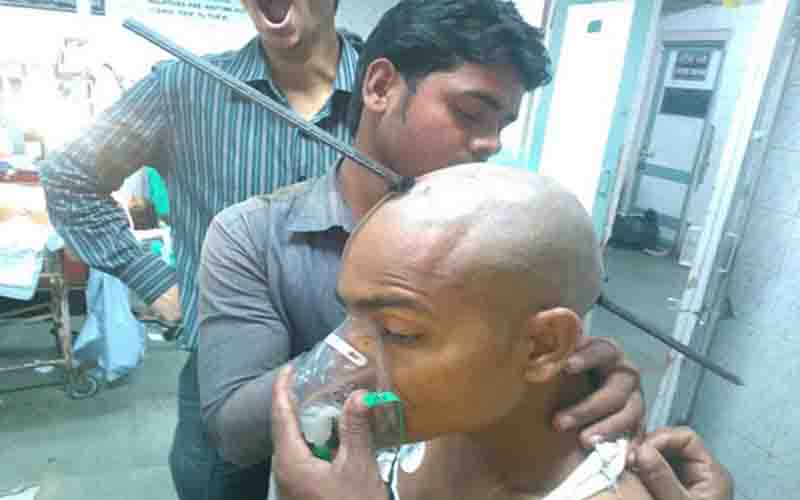 Guddu was mixing cement at a construction site in Tanaji Nagar, Malad (W), last Sunday when a rod fell from the fourth floor, pierced through the top of the head, and partially exited from the back of the head. He was rushed to Sanjeevani Hospital, then to the Sion Hospital, where a team of neurosurgeons led by Dr Batuk Diyora operated on him.

“It is indeed a miracle that the man survived such an injury,” Diyora said. “He was conscious because the rod had pierced what we call a ‘safe passage’ in the brain. The patient’s brain stem wasn’t damaged and the arteries carrying blood to the brain were also safe,” he added.

Diyora and his team cut open the skull bone around the rod to pull it out. “The rod was sterilised to ensure there wasn’t an infection,” he said. The doctors took their time in removing the rod because there was a risk of Guddu losing an eye or suffering from severe paralysis if anything went wrong. “It was a tricky surgery and the challenge was to minimise blood loss,” said Dr Shailendra, who was a part of the operating team.

The doctors said that Guddu is likely to remain in hospital for at least two weeks, and is responding well to the treatment. “The pain is subsiding and the patient may recover fully in three months,” said neurosurgeon Nitin Kotach, who had assisted in the surgery.

Guddu’s co-worker Tanveer, who witnessed the incident, said that everyone was shocked to find Guddu conscious. “He had joined work just 15 days ago. He is a strong lad, and we are just so elated that he survived this accident,” Tanveer said.

Mohammad Guddu, 24, undergoes a 5-hour operation at Sion Hospital; docs say he survived as the rod didn’t damage vital parts of the brain.

A 24-year-old construction worker survived a freak accident in which a sevenft iron rod pierced his skull, and partially exited from the back of his head.

The rod was removed by the doctors at the Sion Hospital in a five-hour surgery, and the man’s astounding survival has been credited to the fact that the rod had pierced a “noneloquent” region of his brain, an area that has no easily discernible cognitive, motor, or sensory functions, and didn’t damage the vital arteries that carry blood to the brain.

The victim, Mohammad Guddu, has developed paralysis on the left side of his body (the right part of his skull was injured), but the doctors were of the opinion that its effect could be reversed in three months.

Previous article
The Proposal: Do you Believe in love at first sight?
Next article
10 Photos That Show Extreme Perfection