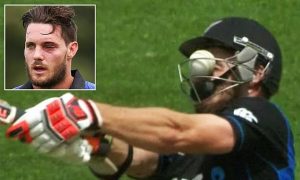 New Zealand fast bowler Mitchell McClenaghan has suffered a hairline fracture just above his left eye, during the first ODI against Pakistan in Wellington. He picked up the injury when a bouncer burst through the gap in his helmet in the final over of New Zealand’s innings on Monday. It rules him out of the second ODI in Napier, and puts him in doubt for the final match on Sunday, as he is scheduled to undergo minor cosmetic surgery on Friday in Auckland. 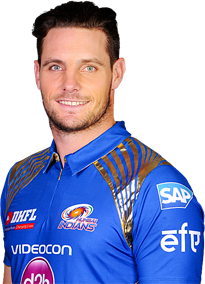 McClenaghan was batting on 31 from 17 deliveries when the penultimate ball of the innings – from Anwar Ali – squeezed between the peak of his helmet, and its grille to strike him flush on the left eye. Slow-motion replays showed the ball had hit him with considerable force. McClenaghan immediately fell to the ground as the umpires, the Pakistan players and non-striker Matt Henry moved towards him. He eventually rose to his feet to cheers from the crowd, after attention from the team physio. The area around his eye was swollen as he walked off the field.

He did not bowl in Pakistan’s innings, spending most of it in hospital instead. He received stitches on his left eyebrow, but was well enough to tweet an update on his condition and congratulations to his team-mates after the victory. “Thanks for all the concerns. Everything is as good as it can be just a few broken bones. Great win for the boys!” he tweeted.

McClenaghan is the fourth New Zealand player to be unavailable for Thursday’s game, with Ross Taylor, Brendon McCullum and Tim Southee also out through injury.